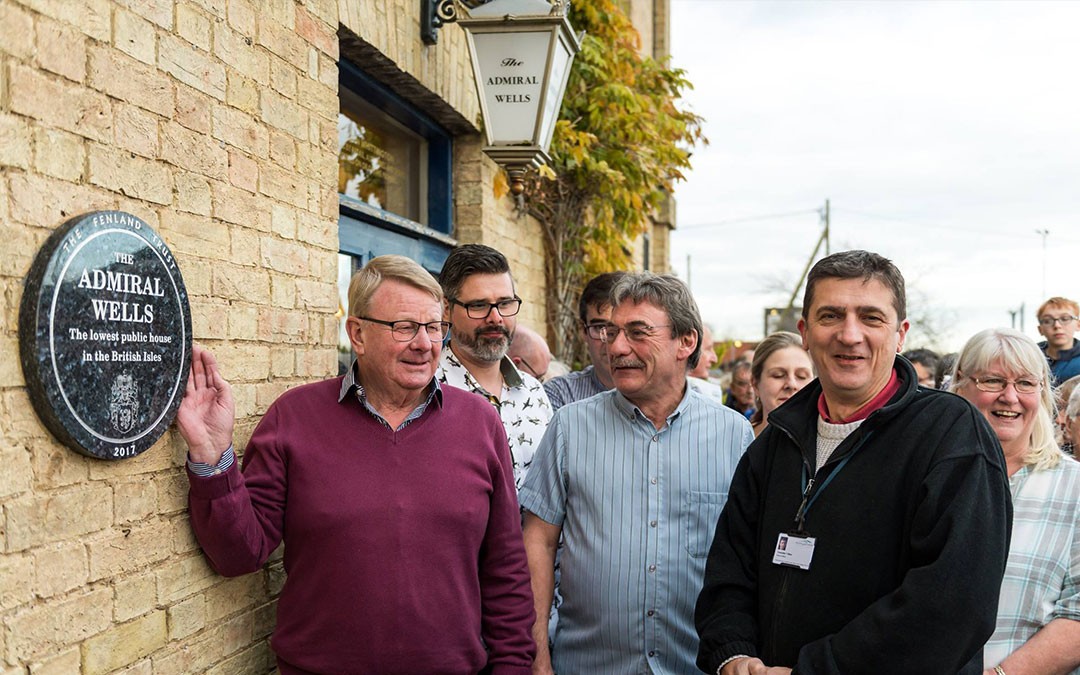 The status of Holme’s public house the Admiral Wells as the lowest in the British Isles was set in stone in November at a special ceremony. The Fenland Trust unveiled a heritage plaque at the inn with members of Holme Parish Council and Huntingdonshire District Council in attendance.

The specially commissioned stone plaque, produced by local master stone masons Fenland Stoneworks Ltd, is the fourth of its kind in the area and represents a major landmark on the national Fen Edge Trail project, which is creating a walking route through Cambridgeshire and beyond. Earlier plaques commemorate the birthplace of astronomer Olinthus Gregory in Yaxley, the Napoleonic prisoner-of-war at Norman Cross and spitfire pilot Harold Penketh. Six more plaques are in the planning stages, extending this regional stretch of the trail further along the perimeter of the Fen and helping to tell stories that connect our past.

The Admiral Wells is approximately one mile from the famous Holme Fen Posts, the first of which was driven into the ground in 1851 (replacing a timber post) and was reportedly from Crystal Palace in London. Its purpose was to measure the rate of peat shrinkage following the drainage of the nearby Whittlesea Mere, which was once Southern England’s largest lake. The draining of the Mere was undertaken by a team of investors led by William Wells and it was he who built the pub in Holme and named it after his grandfather the Vice Admiral Wells, a man who held several high profile naval commands during his career and was a pallbearer at the funeral of Lord Horatio Nelson. The Wells family also owned Holmewood Hall and it is there crest, the demi ostrich with horseshoe that can be seen on the village signs.

Inside the pub, reputed to have been visited by Charles Dickens, is a fascinating collection of old photographs, including images of residents, the Holme Fen Posts and of the nearby RAF Glatton airfield at Conington, which was home to the 457th Bombardment Group, No. 3 Group RAF and nearly 3000 personnel. Whispers of a ghostly presence, said to haunt the staircase add to the allure and mystery of an inn that once served the nearby railway station and is now a warm and friendly base for walkers and birdwatchers.

The unveiling ceremony took place on Sunday November 26th at 2pm and the plaque is on display next to the front door, no doubt becoming a selfie point for those eager to record their visit to the lowest pub in the British Isles.