The annoucement of Microsoft’s Hololens headset last week generated plenty of excitement online, in some quarters eclipsing the company’s unveiling of its new generation leaping operating system Windows 10. With the declaration that “the era of holographic computing is here” Microsoft are promising to connect our digital lives seamlessly with the real world.

Whilst the demonstration of the system’s potential as a new medium to express creativity, visualise work projects and add another dimension to gaming was impressive, it was its significance as a tool for historical interpretation that caught my eye(s). Brushing aside the impressive Minecraft building blocks and promise of Minority Report style virtual navigation, could Hololens represent an embryonic portal for bringing the past to life? Could Hololens be used as a time machine?

Although the term Augmented reality has been around since 1990, the concept is nothing new. In 1862 the scientist John Henry Pepper used a carefully positioned plate of glass to create the illusion of projecting a three-dimensional, translucent ghost into a physical, real world environment. This theatrical trick, called “Pepper’s Ghost” has continued to fool, delight and unnerve audiences to this day, famously being used by Disney in their Haunted Mansion theme park attractions.

In 1957 Morton Heilig developed a system called Sensorama, which encased a subject in a cabinet and gave them the experience of riding a motorcycle through the streets of Brooklyn with a 3D view and the sounds, smells and physical sensations of the ride.

The first (rather unwieldy) head mounted display was unveiled by in 1966 by Professor Ivan Sutherland of Electrical Engineering at Harvard University, boasting primitive wireframe graphics but it wasn’t until 1992 that the first truly functional AR system was developed for the US Air Force.

It was in the 21st Century that rudimentary AR arrived on mobile devices and gaming platforms, reaching mass market when the Nintendo 3DS came bundled with titles that allowed gamers to ‘place’ 3D characters in a real world environment. More recently the evolving Occulus Rift, targeted for official launch this year, offers another way to experience a more immersive virtual reality.

In the wake of the faltering Google Glass project, Microsoft Hololens appears to present a significant step forward, promising to enhance the real world rather than aiming to create a new one. This truly is augmented reality as opposed to virtual reality.

Microsoft Hololens as a Time Machine

Museums globally have been exploring and demonstrating AR technology for a number of years now but no doubt the debut of HoloLens will be gathering significant interest amongst organisations interested in harnessing its full potential to create ever more immersive experiences.

Heritage interpretation is of course enormously challenging. Guides, signage, interactive displays and audio-visual media can be extremely effective but what happens when the subject is incomplete or perhaps even totally absent? How do we generate interest and engage with the public? 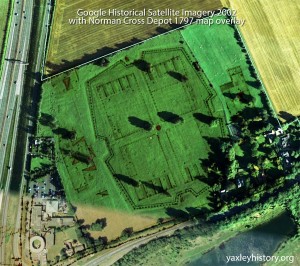 For example, the Norman Cross Depot near Peterborough in the United Kingdom is a site of international historical importance but all that remains of the facility is an empty field. The world’s first purpose-builty prisoner-of-war camp was decommissioned and dismantled in June 1816.

How do we contextualise these kind of heritage sites? In short, how do we bring them back to life?

Perhaps Microsoft Hololens in a future iteration could provide the answer to these questions.

Imagine a low cost, lightweight headset that could not only add augmented 3D elements in an interior setting but also do the same outdoors. A visitor could view a digital recreation of a heritage site in context permitting the wearer to experience an immersive virtual recreation of a building or structure supplemented by computer-generated sensory input such as sound and video with voice control.

It goes without saying that the technology could be used right now inside museums but for me the idea of turning a museum ‘inside-out’ is far more intruiging. Unlimited by physical boundaries, imagine a living historical landscape populated by buildings, information and even people and animals from the past - from the resurrection of a long lost prison depot to the depiction of herds of lumbering prehistoric megafauna grazing on the horizon.

With the distance between science fiction and reality getting smaller with every new augmented reality breakthrough, perhaps the heritage holy grail is closer than we think.